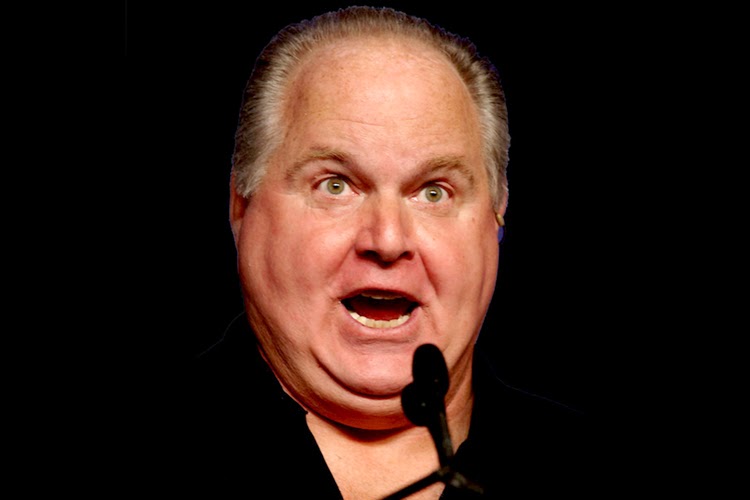 Today's Mediacrity Award goes to the one and only Rush Limbaugh.  Why, you ask?  Could it be his legendary charm on the airwaves? Could it be his irrepressible wit and the aplomb with which he skewers the LIEberal media on his show every Monday through Friday? Nope, today's Mediacrity Award goes to Limbaugh because even though he has proven himself over and over again to be a slimy demagogue with a cadre of moronic, mouth-breathing rednecks and neo-Conservative fraud assholes as fans, he proved this week that he can still hit new lows by implying that Robin Williams may have killed himself because of his "leftist worldview." He swiftly walked back these comments one day later, if you could call turning an actual audio clip into being "taken out of context" and turning the whole thing around by accusing the media of "glorifying suicide" and speculating that the "laudatory" coverage might inspire others to commit suicide also "walking back" his remarks. The fact that he managed to do this in the same week he apologized for police crackdowns on citizens in Ferguson, MO and basically argued that reporters who were arrested should have just complied with officers' unlawful instructions and surrendered their rights as citizens and journalists because of the unrest going on (I won't link it here because the transcript is hosted on his site and I refuse to send it traffic, but look it up if you want to) is nothing short of amazing.

Does this fat, obtuse slimeball actually believe the average person thinks they would garner three to four days of coverage in the media if they also killed themselves as Robin Williams did, or is this the same sort of make-believe culture warrior bullshit that he and his ilk continually peddle to their increasingly psychotic fans in order to hold their short attention spans for one extra moment? Mr. Limbaugh, I believe someone with a worldview like yours, should you actually hold it in real life, is suffering from some serious psychological problems and you may want to investigate treatment options for this disorder right away before you begin to harm yourself or others. Either way, shut the fuck up already, will ya?