This week's Mediacrity Award goes to.... 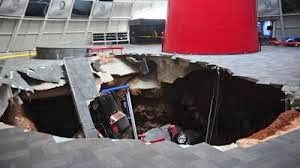 Boring choice? That's the point! Despite the popular fascination with them, sinkholes are as natural and common an occurrence in the swampy South as earthquakes and wildfires here in mountainous desert CA. I could maybe understand a sinkhole dominating national news coverage if it swallowed an apartment complex along with several families; but the mainstream media's week-long gaping mouth coverage of the damage to 8 pretty cars in a museum symbolizes everything that's wrong with this country.

Leave this story for car enthusiast magazines. Let's talk about the State gay marriage bans that were struck down by Federal Courts this week, Putin's asinine posturing over Ukraine as his Olympics demonstrate he couldn't invade his own servant quarters, the resilience of BitCoin against every possible problem simultaneously and what that means for the global financial system, and Rand's lawsuit against the NSA. You know, things that effect us all whether we understand them or not. Those Corvettes wouldn't begin to matter if there were 800 of them, and the entire museum vanished mysteriously in broad daylight.