This Week's I Told You So Tuesday Award Goes To.... 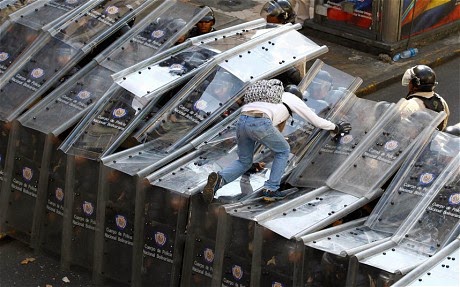 A little under a year ago, as I danced on the grave of murdering psychopath Hugo Chavez and analyzed the election of his successor, I predicted that despite the pomp of the mourning and the charade of unity behind his legacy - Venezuela would deteriorate into economic collapse and civil unrest in the aftermath. Well, here we are:

- Extreme shortages of basic goods leading to skyrocketing prices and near-starvation for millions of Venezuelans.
- Government enacting price and currency exchange controls that absolutely no one obeys because these make shortages worse, and selling the country's gold and foreign currency reserves to buy emergency supplies, destroying its own currency.
- Massive unrest and riots being framed by the government as a coup by ambitious, self-interested actors; but consisting of 100,000s of young Venezuelans with nothing to lose and figuring if they're going down, this monstrous government is going down with them.

THIS is Socialism, in all its glory. It's NOT Communism, even though it poses as such. Nor is it the Keynesian Welfare State of tax and debt funded stimulus and safety nets that exists in the US and Europe. I'm no fan of that system, but opponents would do well not to confuse it with Socialism.

Socialism is defined as the means of economic production and distribution being State-run - and Venezuela's current dismay is how that will ALWAYS end up. No one has any incentive to produce because the fruits of their labor will be taken by force, embezzled by the corrupt distributing government, and what's left distributed evenly between everyone who does nothing. The system allegedly relies on collective faith in itself, so those that speak out against it must be repressed; which in practice gives the government carte blanche to repress anyone trying to legitimately call it out on corruption. This system is only kept marginally functional via egregious human rights abuses that force work and discourage rebellion, keeping people docile in their abject poverty. But the moment there's a disruption - i.e. the dictator dies - the fear is gone, production drops, and violence ensues. This happened in the USSR following the deaths of Stalin and Brezhnev, in Yugoslavia following the death of Tito, and so forth. It doesn't take a genius to expect it in post-Chavez Venezuela. Cleanse yourself, Venezuela; every country that dumps this system makes the world a better place.

As for you, my readers, learn from this that faith in government doing what it's expected to do and people working voluntarily for the public benefit is like an infectious collective psychosis. Keynesianism relies on these, but it's meant as a limited add-on to a free market system - which is why we haven't ended up with Venezuela's fate despite its failures. True Socialism depends entirely on this faith, however. The next time some idiot proudly declares himself a socialist and tells you to move to Somalia, tell HIM to move to Venezuela because that is invariably what he is proposing. The next time an intelligent person argues for the Welfare State, point out the elements of that system that rely on government benevolence and collective voluntarism, and how well that worked for Venezuela.

Email ThisBlogThis!Share to TwitterShare to FacebookShare to Pinterest
Labels: Hugo Chavez, I Told You So, Keynesianism, socialism, Venezuela