The First I Told You So Tuesday Award Goes To....

In light of the success of our Mediacrity Award given every Friday, I welcome you to "I Told You So Tuesdays". Every Tuesday, I will rub the faces of apologists and idealists from a few weeks prior in a policy failure that I predicted. My objective here is to demonstrate the power of empirical policy analysis over emotional insistence; and better equip our patrons to distinguish political truth from lies.

With no further ado, the distinguished first inductee into this hall of shame is 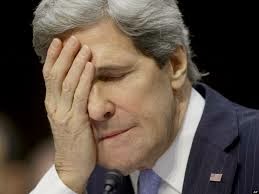 
Less than 3 months ago, Kerry was condescendingly talking up his "Iran deal" as some diplomatic breakthrough, and emotionally defending the "need" for Syria talks. What happened?

- The Syria talks are in shambles, as the psychopathic war criminals on both sides of the conflict came to the consensus that John Kerry was not going to tell them how to run their country (surprising only John Kerry).
- Iranian President Rouhani has already reneged on the relevant aspects of the deal, playing John Kerry for a sucker as I accurately predicted here.

As the 2004 election cycle demonstrated, even in a losers' competition - John Kerry is only capable of 2nd Place. Nobody likes him. While that's not always the end of the world for a politician, it's a deal-breaker for a diplomat; and appointing him Secretary of State was a colossal management fail even by Obama's standards. Kerry has 0 success to speak of and as President, Obama's job is to hold him accountable and take responsibility for making a shitty appointment - NOT insult our intelligence by repackaging Kerry's lies in the SOTU.

Email ThisBlogThis!Share to TwitterShare to FacebookShare to Pinterest
Labels: Barack Obama, I Told You So, Iran, John Kerry, Rouhani, Syria