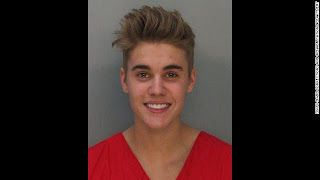 Another somewhat obvious one. What is so shocking and newsworthy about a teenager from an abusive family with no education nor culture taking a cocktail of drugs and getting the behind the wheel to street-race? Bieber is NOT a role model. Americans are surprised by this because of his artificially manufactured image as a cherub-faced child sensation making catchy tunes and stealing the hearts of adolescent girls; but 10 minutes of research into his actual background demonstrate how inaccurate that image is.

Being objective and fair, Bieber IS marginally talented. However, far better musicians and performers are passed over daily by the record industry, as producers have a penchant for adolescents with dysfunctional families and chaotic childhoods. Such individuals tend to lack consistent personal values, making them clueless and easy to manipulate; and Bieber demonstrated EXACTLY that. Behavior like his is probably far less frowned upon in the Canadian one-horse town where he grew up, and considered downright normal in his immediate childhood environment. Busted for doing this in Miami in a Lamborghini, he was reportedly confused and didn't understand what the big deal was. All that money and fame cannot substitute for half-decent parenting.

Popular culture is like a collective drug addiction for the American public. We distract ourselves from reality with pop icons like Justin Bieber knowing full well they are fake, then are traumatized when the delusions are shattered and immediately seek a new fix. Grow up, get this garbage off the news, and start paying attention to the real world around you.