This Week's "It Doesn't Belong In the News" Award Goes To.... 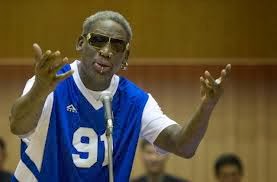 Really, who else could it be?

Dennis Rodman is NOT some unofficial ambassador to North Korea. Being hangout buddies with Kim Jong Un does not make it reasonable to expect him to influence that country's foreign policy; if anything, someone stupid enough to do the former shouldn't be relied on for the latter. On the flip side, we didn't send him there; so unlike the incompetence of our actual diplomats, his behavior does not represent the United States.

In short, he's just an idiot that clearly didn't get enough attention as a child, and reporting on the activities of such celebrities outside the 'entertainment' section dilutes real news. MAYBE if the media would stop making a global spectacle out of his abject stupidity, he would crawl back in the hole he's been in for the last 15 years - but I wouldn't count on it.